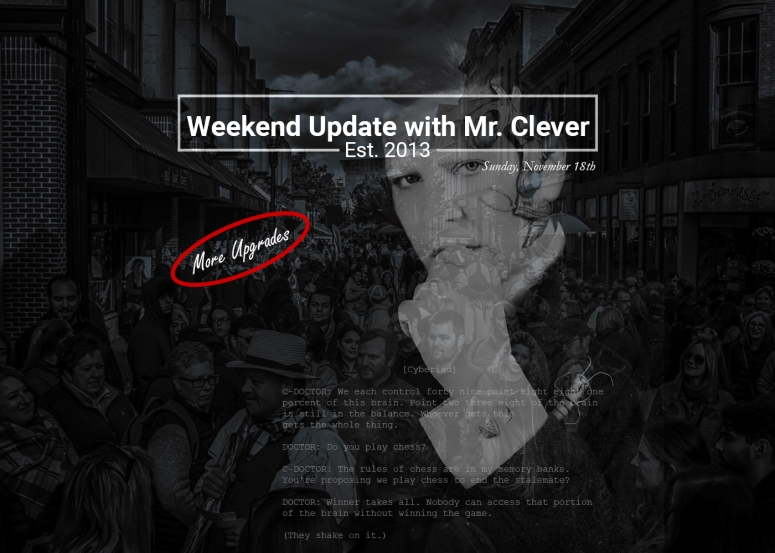 Good evening everyone, I’m your host, Mr. Clever and welcome to another Weekend Update.

The weeks before Thanksgiving is what Salem residents refer to as “Recovering from October” while I refer to it as “Post October Depression.” It can be tough running on all cylinders for 31 days, then abruptly halting come November 1st.

But have no fear, that’s why we have #conlife.

Despite the cancelation of Jenna Coleman, a few of us wondered if it would still be worth it to attend that most stressful of local cons – RICC. Anyone that has attended RICC knows the many potential challenges. The amount of people and the issues just getting inside. People (and children) getting locked out of the con. Being unable to get back to one side of the con or the other. The list goes on (and on and on and on). But, the tickets were bought, the bags were packed, so off we went.

It was so much better than expected. They made a lot of changes to the layout and we went on Sunday. I don’t know if it was one or the other or both but this was the first time it didn’t feel like I spent the entire time elbowing through crowds as thick as Halloween in Salem. It was wonderful and felt like maybe I wouldn’t need a special reason to go next year. (Ask me about my RICC must see list…)

As I bid goodbye to another October and RICC, some of my friends and I decided to treat ourselves with a little day trip to Maine. Now mind you, to me, Maine means one thing – Stonewall Kitchen. And lots and lots of pumpkin butter. And possibly one or two things for CJ (but not likely).

If you have never been to the flagship Stonewall Kitchen location, go now. I foresee many more trips in my immediate future!

For the weeks ahead I don’t mind saying I don’t really celebrate Thanksgiving but I am excited about the grand opening of a new chocolate shop in Salem: Kakawa Chocolate House. I got to meet the owner / proprietor and you can bet I want to be one of the first in line to taste whatever goodies they have in stock.

This has been your weekend update for the week ending November 18, 2018.
Cyberplanner out.